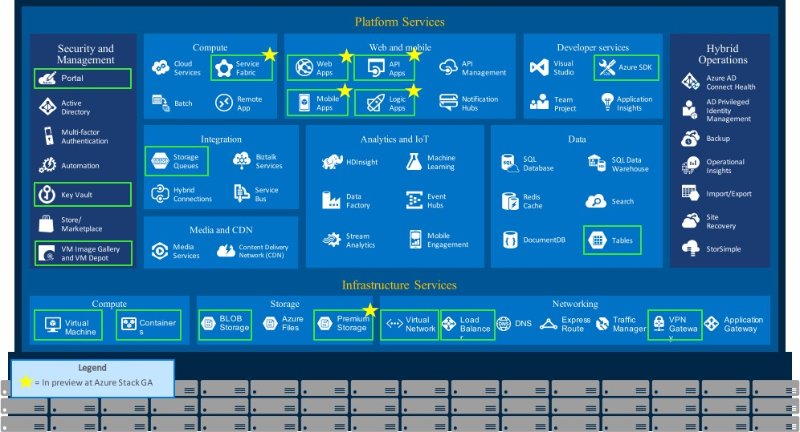 With the information we have got this week, how Microsoft will offer Azure Stack to its customers, it’s a fair question how it will look like compared to the current CPS solution.

Some thoughts about this…

Currently CPS will scale up to 8000 VMs in 4 Racks  (if you look at the big solution and not the SMB one). If you want disaster recovery or simply more resources, you need another Stamp. CPS will replicate your Azure Pack settings between the different stamps, so your customers will be able to log into the active primary site and the backup site in the case of a failure. You are not able (as far as I know) to create different locations with another CPS Stamp from one single portal. Because each CPS comes with its own Azure Pack.

As Azure Stack will manage all the infrastructure itself, some of the current System Center components will become obsolete.

SCVMM will not take any place in the fabric management, so all current tasks will be moved over to Azure Stack.

SMA may be replaced by Azure Automation. Maybe just a rebrand? Dunno…

The Azure Pack Portal will be replaced by the Azure Stack Portal. Doh’ 😉

SCOM and DPM will stay in place for monitoring and backup.

Without knowing the actual scale numbers, supported by Azure Stack. I am fairly sure they will be bigger. But how will the deployment look like? Are they going to support the current setup with a maximum of 4 Racks per stamp with Disaster Recovery offered by a second stamp? With this you will “only” have one cloud, because you have the second cloud as a backup. Or will they give you the opportunity to build mulitple locations with multiple deployed stamps merged into one “big cloud” regardless of the count of stamps?

With new features like storage replica, which is coming for free with Server 2016 a better and more flexible solution should be possible out of the box.I think your Azure Stack can be managed through the “real big cloud” Azure and will give you the opportunity to offer different locations to your customers with the resiliency baked in the backend by new features coming in Server 2016.

Which would leave one question open.. Will you be able to have a Azure Stack without Azure? In TP1 a working Azure subscription is required to set it up.

I think we will get a better idea on how this will look like with the TP2 release which is announced later this summer. TP2 will include infrastructure management as well.

What do you guys think?

Any thoughts? Write them in the comments.

Update: rewrote some parts of the “Scaling and features” paragraph.

One thought on “How will Azure Stack really look like?”